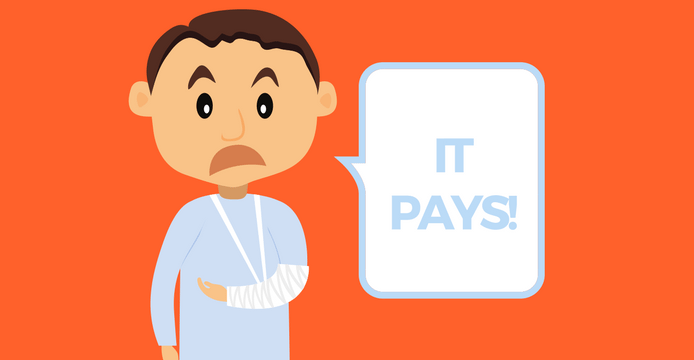 Don’t be afraid to tell your Doctor everything – it pays!

You would be forgiven for thinking that if you were sitting, stationary in your car and waiting to turn left, when you are hit from behind by another car and your car is pushed for 50 metres along the road, that you would be entitled to a substantial damages payout. Well, that does not always turn out to be the case.

While driving her car on 2 September 2014, Ms Linda Lehmann was stationary, waiting to turn left, when another vehicle failed to stop behind her, collided with her car and pushed it 50 metres along the road. Ms Lehman suffered minor injuries in the accident including:

She was taken to the Gold Coast hospital for observation and released later that day.  The accident happened on a Tuesday.  Ms Lehmann took the rest of that week off work, which amounted to 2 days lost work for her. She re-commenced her work as a bookkeeper the following Monday. Ms Lehmann first saw her GP, Dr Cheung, just over 3 weeks after the accident in late September. The doctor made a note that she attended because of “whiplash and neck pain”. She attended on the doctor again in February 2015 and complained about ongoing pain. Some months later, Ms Lehmann stopped work. Her reasons for doing so included the injuries from her accident as well as the desire to spend more time caring for her daughters after separating from her husband. Ms Lehmann brought a claim against the CTP insurer. The insurer admitted that its’ driver was at fault for the accident, i.e., liability was not in dispute. The claim was simply about how much money the insurer should pay her. As is the usual practice in CTP claims, both the insurer and her lawyers arranged for Ms Lehmann to be examined by medico-legal specialists, in this case by an orthopaedic surgeon and an occupational therapist. Ms Lehman and the insurer were unable to come to an agreement over the compensation she deserved and the matter was taken to court.

Ms Lehmann’s claim was heard in the Magistrates’ Court. At the trial, the Magistrate heard evidence from a number of witnesses, including:

The Magistrate dismissed her claim for damages for the loss of earning capacity into the future. In his decision, the Magistrate stated:

“I accept the undisputed evidence …that she had only two days off work as a consequence of the accident. I find that she has suffered no ongoing compensable loss, in accordance with the opinion of Dr Dickinson. At most, the plaintiff has suffered some minor cervical pain for a limited period. I find, on the balance of probabilities, that her complaint of thoracic and lumber (sic) pain is unrelated to the accident. I find that the plaintiff has not proven that she has sustained any loss of earning capacity into the future. She is capable of working as a bookkeeper at the least, and has been since the accident.”

Ms Lehmann appealed against the decision to the District Court, which was also unsuccessful. When giving his reasons for dismissing the appeal, the Judge said that he was:

“… not satisfied Ms Lehmann has demonstrated that the magistrate failed ‘to properly consider’ her evidence not (sic) any error in the learned magistrate’s reasoning with respect to the assessment of the expert medical evidence.

My opinion is that Ms Lehmann was ‘hard done by’ with this outcome. Both courts adopted a black letter law approach in her claim, which even though it was a correct decision at law, has led to a harsh outcome for Ms Lehmann. To find that Ms Lehmann sustained ‘some minor cervical pain for a limited period only’ and that her ongoing issues are not related to the accident in my opinion does not pass the common sense test. While I do not profess to have medical qualifications, in the absence of a finding that Ms Lehmann was feigning her symptoms or some other rational explanation for them, the symptoms she as reporting appear to be entirely consistent in my experience with clients who have been in accidents involving a significant impact (remembering Ms Lehmann’s car was pushed along for 50 metres by the impact). They are also commonly seen across all accidents with spinal related injuries (including whiplash) making up 61.3% of all claims in QLD (see Graph X).” In my experience, it is not uncommon for injured persons to return to work after accidents and struggle on with work through the pain (because they have no other option other than to apply for social security benefits). Despite that, they still can qualify for future economic loss damages if they establish that:

These are issues that I address with my clients before they attend medical examinations to ensure that these issues are taken into account by the examining specialists and again form part of the particulars of the claim being advanced for them.

The essential concerns arising from this judgment for claimants are: